Mention the phrase “software architecture diagram” and most people instantly think about drawing a collection of boxes and lines to somehow represent the structure of their software system. One approach is to hand-draw such diagrams using pen, paper and whiteboard or perhaps a tool like Microsoft Visio. These approaches can work, but the resulting diagrams are simply static pictures that are created by manually drawing boxes and lines on a diagram canvas. You have all of the control over what you draw, and with that control comes the responsibility to ensure the diagram is consistent, accurate and reflective of the reality in the code. Diagrams are static and we can’t ask them any questions. Diagrams are purely visual representations.

I use what I call the “C4 model” to describe and visualise software architecture1. It’s about creating a shared vocabulary that you can use to think about and describe the static structure of a software system using a number of hierarchical building blocks. For example, a software system is made up of one or more containers (web applications, mobile apps, standalone applications, databases, file systems, etc), each of which contains one or more components, which in turn are implemented by one or more classes. This description of the static structure can then be used as a starting point for a collection of simple diagrams, focussing separately on the (system) context, containers, components and classes. The C4 model is compatible with diagramming and modeling approaches.

Back to modeling then. There are many tools that support this way of working; such as No Magic MagicDraw, Sparx Enterprise Architect, Archi, IBM Rational Software Architect, ArgoUML, etc. There are also modeling tool plugins/extensions for many of the popular IDEs. Essentially they all follow the same principle, by providing you with a way to create and a populate a model. You then use this model to create a number of diagrams, each of which represents a specific view of the model.

The power of having a model starts to come into play when you need to rename a software system. All you do is rename it in the model and all occurrences of the software system across all diagrams are renamed too. Compare this to a collection of static diagrams where you need to check each diagram and rename any occurrences that you find. This is how a model introduces and improves consistency over a collection of static diagrams.

Modeling tools typically support many different types of models and notations; including the Unified Modeling Language (UML), SysML, ArchiMate and so on. This is great if you want to use these languages, otherwise you’re out of luck. The other aspect you can’t ignore is that you have to create the model, and often it can be a time-consuming task to populate the model with information. If you’re modelling a software system as part of an up-front design exercise, the only real option you have is to use the modeling tool’s user interface to populate the model. This can sometimes require lots of tedious data entry. If you have an existing codebase though, some modeling tools will provide the option to reverse-engineer the code and populate the model for you.

There are many tools available that will help you reverse-engineer a codebase to create a model. Some of the modeling tools mentioned previously will do this, as will the popular IDEs. In addition, there’s a category of static and dependency analysis tools that will do this too. Examples include Structure101, NDepend, Lattix, Sonargraph, etc. These tools work by scanning your codebase for elements and their dependencies. For an object-oriented programming language such as Java, this usually means creating a model of the code based upon the set of classes, interfaces and packages along with the dependencies between all of these elements. Although the primary purpose of static analysis tools is to provide you information about the quality of your code, most of them also create some sort of architecture diagrams. These tools also resolve the thorny issue of how to keep diagrams up to date as a codebase evolves.

If you’ve ever tried to use a static analysis or modelling to automatically generate meaningful diagrams of your codebase via reverse-engineering though, you will have probably been left frustrated. The resulting diagrams tend to include too much information by default and they usually show you code-level elements rather than those you would expect to see on a software architecture diagram. Here’s what happens if you take a naive approach and generate a UML class diagram for a sample codebase like the “Spring PetClinic” web application2. 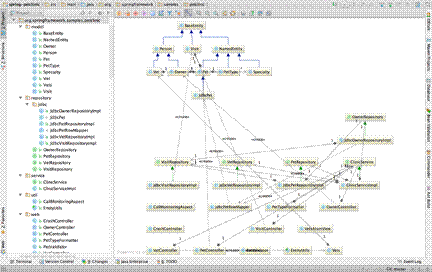 It’s worth noting that, thankfully, most static analysis tools won’t show you a single UML class diagram of an entire codebase. Instead they’ll start by showing you the top-level packages/ namespaces and the dependencies between them. Double-click a package to expand it and you’ll be shown the sub-packages and classes that reside within that package, along with the dependencies between them.

Although some static analysis tools claim to generate “architecture diagrams”, the diagrams they actually create are still very code focussed. Like us browsing a codebase, these tools see classes and interfaces in packages/namespaces when reverse-engineering code. Some tools can be given rules to recognise architectural constructs (e.g. components or layers) but this isn’t typically the default out-of-the-box experience. In essence, these diagramming tools suffer from what George Fairbanks calls the “model-code gap”3, where our mental model of a software system differs from that used by the code. While we often describe software using terms such as component and layer, programming languages like Java don’t have “component” and “layer” keywords. Instead, there’s a mapping from the language constructs (e.g. class, interface and package) to components and layers.

??Ultimately, I’d like to auto-generate as much of the software architecture model as possible from the code, but this isn’t currently realistic because most codebases don’t include enough information about the software architecture to be able to do this effectively. This is true both at the “big picture” level (context and containers) and the lower level (components). One solution to this problem is to enrich the information that we can get from the code, with that which we can’t get from the code.

There have been a number of attempts to create “Architecture Definition Languages” (ADLs)4 that can be used to formally define the architecture of a software system, although my anecdotal experience suggests these are rarely used in real-world projects. There are a number of reasons for this, ranging from typical real-world time and budget pressures through to the lack of perceived benefit from creating an academic description of a software system that isn’t reflective of the source code.

In my own attempt to solve this problem, I’ve created “Structurizr”5 to combine the benefits you get from creating a model using text and having it kept up to date using static analysis techniques. Put simply, it’s a way to create a software architecture model as code, and then have that model visualised by some simple tooling. The goal of Structurizr is to allow people to create simple, versionable, up-to-date and scalable software architecture models. 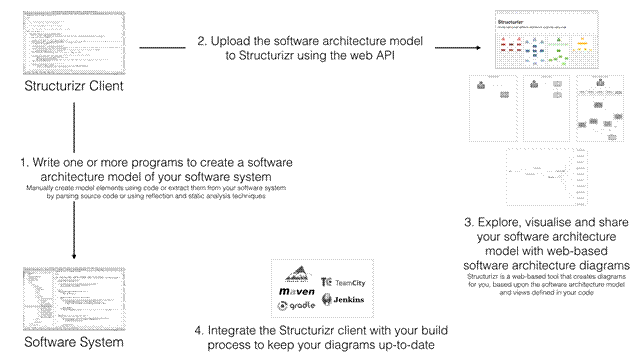 Structurizr is a tool of two halves. First is an open source library called “Structurizr for Java”6 that can be used to create a software architecture model using code. It’s an architecture description language based upon the C4 model, implemented in Java. It’s essentially a domain specific language that you can use to describe the static structure of a software system, with Java classes that represent people, software systems, containers and components. In a typical usage scenario, the people, software systems and containers are created manually using code, whereas the components are extracted automatically from a codebase using static analysis and reflection techniques.

To do this, you need to understand what a “component” means in the context of your codebase. With a Spring MVC application, for example, perhaps this is as simple as finding all of the Java classes that are annotated using @Controller, @Service and @Repository. The Structurizr for Java library includes a ComponentFinder class, and there are a number of different implementation strategies that you can plug in and extend to help you extract components from your own codebase. Example strategies for identifying and extracting components include finding classes annotated with a given set of annotations (e.g. Spring, Java EE, etc), naming conventions (e.g. find all classes where the name ends with “Service”) and so on. In addition to finding components, the ComponentFinder will also work out the dependencies between those components. A full code example that describes the static structure of the Spring PetClinic web application can be found in the Structurizr for Java GitHub repository7.

The open source Structurizr for Java library allows you to create an in-memory representation of the software architecture model, in this case as a collection of Java objects. It also includes a way to export this model to a number of external representations, including a JSON document, which can then be imported into some tooling that is able to visualise it.

Structurizr.com is the other half of the story. It’s a web application that takes a software architecture model (via a web API) and provides a way to visualise it. Aside from changing the colour, size and position of the boxes, the graphical representation is relatively fixed. This in turn frees you up from messing around with creating static diagrams in drawing tools. As a disclaimer, Structurizr is a commercial product with free and paid plans, but you’re not limited to using it because you can write code to export the model created by the open source Structurizr for Java library to other formats too (e.g. Graphviz, XML Interchange for UML, etc). The result of visualising the Spring PetClinic model with Structurizr, after moving the boxes around, is something like the following. 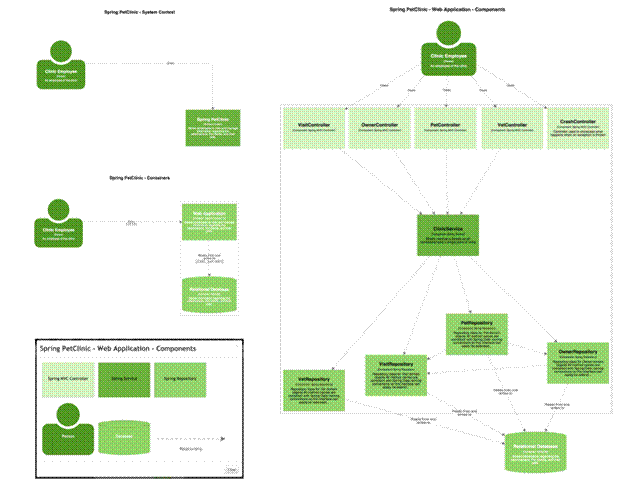 The live version of the diagrams can be found online8 and they allow you to double-click a component on the component diagram in order to navigate directly to the Spring PetClinic code that is hosted on GitHub. This links the software architecture diagrams with the code, essentially creating a set of maps of your software. 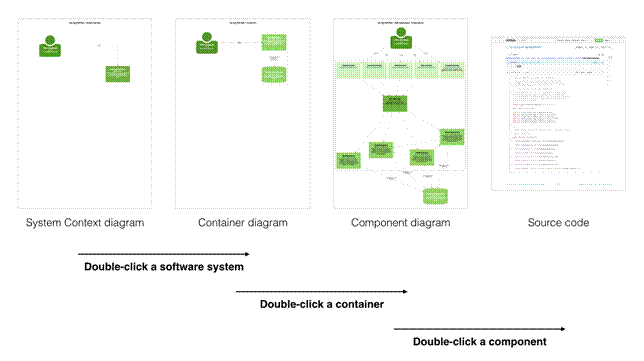 Having the software architecture model as code opens a number of opportunities for creating the model (e.g. extracting components automatically from a codebase) and communicating it (e.g. you can slice and dice the model to produce a number of different views as necessary). For example, showing all components for a large system will result in a very cluttered diagram. Instead, you can simply write some code to programmatically create a number of smaller, simpler diagrams, perhaps one per vertical slice, web controller, user story, etc. You can also opt to include or exclude any elements as necessary. For example, I typically exclude logging components because they tend to be used by every other component and serve no purpose other than to clutter the diagram.