It’s time to dive into one of the new features which Java 13 will bring. After a long wait, Java 13 finally brings support for multi-line string literals after dropping similar functionality from Java 12.

Written by Vojtech Ruzicka on his Programming Blog

Declaring a string literal in Java is easy:

Nothing new, right? Traditional string literals have, however, some inconvenient limitations.

First of all, the whole literal needs to be on just one line. This is ok for simple short strings, but for longer ones, you need to resort to concatenating multiple string literals. If you want also to include line breaks, you need to add \n .

This is cumbersome and hard to read. The other problem is that various characters cannot be represented directly, but need to be escaped, such as ” or \ . This makes your strings even harder to read and work with.

This gets especially messy in cases such as regular expressions. How to handle this issue though?

As usually, Java is late to introduce a functionality which is already common in many other languages, even those on JVM. Kotlin, Scala or Groovy already support multiline strings literals using “”” notation instead of usual ” . Look at the following example in Kotlin.

As you can notice, not only is it multiline, but also you don’t need to escape your characters anymore. This is called Raw String literal, which means all the characters are interpreted as is and no escaping is necessary.

In Java 12, there was originally proposal to include Raw String Literals (JEP-326). The behavior was very similar to the example in Kotlin above. But instead of using “””” as in other JVM languages, it used backtick ` notation. The concept was slightly unusual in a way that you could use any number of backticks and the same amount of backticks at the end. This way it was not necessary to escape backticks inside a spring literal no matter how many consecutive backticks were present.

One problem with raw string literals is usually indentation. Every character in the multiline raw string literal is interpreted as is – including indentation, which is supposed to be there just for better code readability rather than part of the literal itself. Consider the following example:

If you print it, all the lines except the first will have indentation present.

You would need to fix this manually, possibly with newly proposed String methods align() and indent() . Not very practical, but it’s something you would have to endure if using raw strings.

You can read more about original Raw String Literals proposal in the following article:

Java Raw String Literals Java finally brings support for raw strings. They can span multiple lines and you don’t need to escape special characters. Especially useful for regular expressions.
This proposal was, however dropped before the final release of Java 12 and is now considered obsolete.

While we can expect that for any language feature, there will be a nontrivial volume of “I would have preferred it differently” feedback, in reviewing the feedback we have received, I am no longer convinced that we’ve yet got to the right set of tradeoffs between complexity and expressiveness, or that we’ve explored enough of the design space to be confident that the current design is the best we can do. By withdrawing, we can continue to refine the design, explore more options, and aim for a preview that actually meets the requirements of the Preview Feature process (JEP 12).

After the withdrawal of the original proposal, the discussion was restarted and resulted in a brand new proposal, which will be introduced in Java 13 as a Preview Feature. Its called JEP 355: Text Blocks (Preview).

It is not supposed to be an implementation of Raw String Literals, but rather multiline String literals, which will still allow escapes, although you’ll not be required to use all of them. On top of that, it will not be necessary to handle all the indentation issues, which was necessary with Raw String Literals.

Text blocks will be only available as a preview feature in Java 13. What does it mean?

A preview language or VM feature is a new feature of the Java SE Platform that is fully specified, fully implemented, and yet impermanent. It is available in a JDK feature release to provoke developer feedback based on real-world use; this may lead to it becoming permanent in a future Java SE Platform.

Such features are shipped in the JDK but are not enabled by default. You need to explicitly enable them to use them. Needless to say, it is not intended for production use, but rather for evaluation and experimentation as it may get removed or heavily changed in a future release.

You’ll need to download JDK 13. In IntelliJ, go to File → Project Structure and make sure you have JDK 13 selected under Project SDK. To enable Text Blocks as a preview feature, be sure to select 13 (Preview) - Text blocks under Project language level 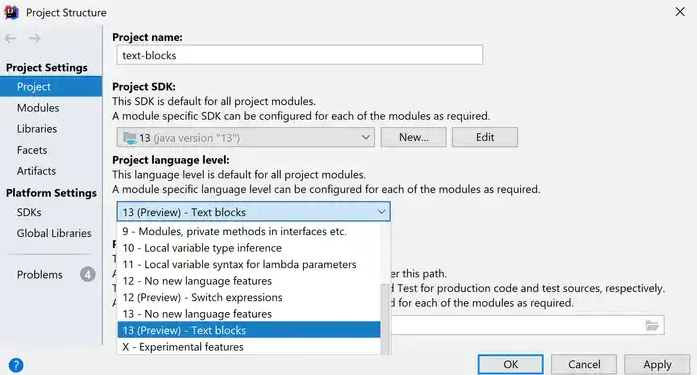 When building your app manually, you need to specify that preview features should be turned on by providing the following params to javac:

That is for compile-time. At run-time, you just provide –enable-preview

Unlike the declined Raw String Literals, Text Blocks are surrounded by three double quotes “”””, same as in Groovy or Kotlin. It is more in sync with plain String literals and other JVM languages.

There is no runtime difference between Text Block and String literal. Both result in an instance of String. If they have the same value, they’ll get interned as usual and end up as the same instance. Everywhere you can use String literal, you can also use Text Block.

Unlike regular String literals, Texts block are processed by the compiler in three steps:

Windows uses Carriage Return \r and Line Feed \n, while Unix-based systems use just Line Feed. The problem is that Text Blocks use new line characters directly from the source code, instead of using \n such as regular string literals. That means that source code created on Unix would have Strings with different line endings when compiled on windows. The Strings would look identical to the naked eye but would have different line endings.

To prevent this, Java compiler takes all the line endings in Text Blocks and normalizes them to Line Feed \n . What is important is that this is done before evaluating escaped characters. That means that if you explicitly need to include Carriage Return using \r, you can, as it is evaluated after line ending normalization and would not be affected.

Remember the example with Raw String Literals and indentation? Raw string literals interpret all the characters including indentation. So whitespace which was supposed just to make your source code easier to read actually becomes part of your strings. In the vast majority of the cases, this is not desired behavior.

What does this mean exactly? Let’s look at the following code:

The HTML code snippet contains a whole lot of whitespace, but it does not really belong to it. It just makes it well aligned within the source file. What is significant is the relative indentation inside the block.

In other words: If every line in the snipped starts with 22 whitespaces, we can ignore them. These 22 spaces are common whitespace prefix, which can be ignored and only what is on top of that should be kept.

Let’s replace common prefix with . All of these spaces will be discarded. Only spaces marked with - will be kept as they exceed the common whitespace prefix.

The result will be:

Note that in this step only direct whitespace is removed. If you have whitespace in a form of escaped characters such as \n or \t , it will not be removed.

Text Blocks are not raw strings and you can still use escapes. However, you don’t need to bother with the most common ones.

Since the quoting is allowed, you technically can include \n and \" But it is not necessary and it is discouraged. You still do need to escape slash \\ But in general Text Blocks involve a lot less escaping than good old String literals. All the escape sequences, which can be used in String literals, can be also used for Text Blocks. Check the Java spec for the full list.

Interpreting escaped characters as the last of the three steps is important as your escapes are not affected by line ending normalization and whitespace removal.

As part of Text Blocks proposal, there are three new Methods of String class.

Want to see the original Blog made by Vojtech Ruzicka? You can find it right here!