Our GraphAcademy is teaching folks starting out in the graph space the fundamentals of the data model, query language, and graph algorithms.

And for developers, there are courses for using our drivers and building the backend of a fullstack app in JavaScript, Go, Python, Java, and soon .Net. 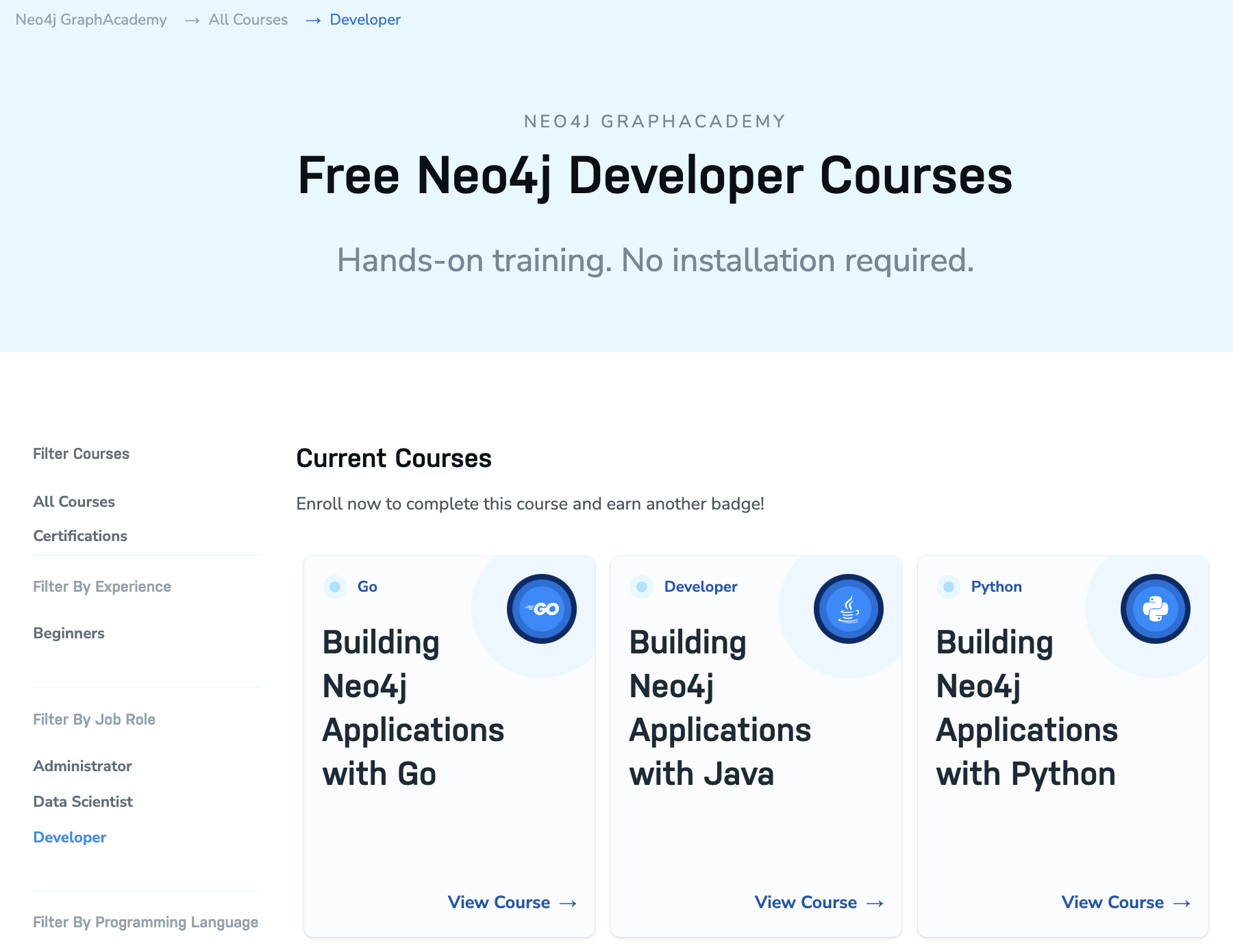 The application is an IMDB clone based on the MovieLens recommendation dataset augmented with movie and cast data from themoviedb.org.

The front-end is written in vue.js and looks pretty slick.

It calls a number of REST API endpoints to serve the different views and functionalities. 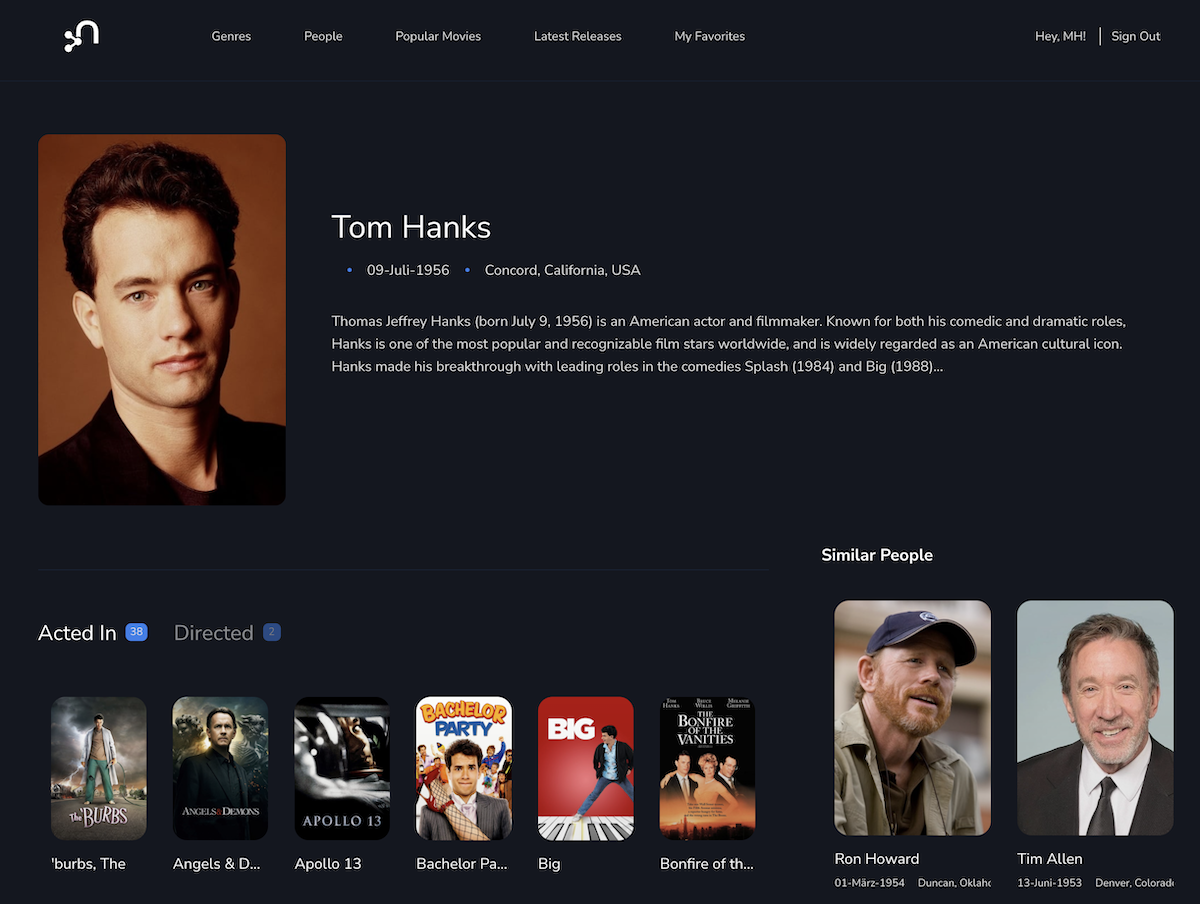 The app-development course walks through implementing the endpoints step by step, starting with fake fixture data and ends at the full-fledged app, ready to be deployed.

Jennifer Reif and I volunteered to implement the course for the Java Backend and want to discuss some of the choices made and aspects we noticed while building it.

The repository with the application code is standalone and can be use to build and run the app.

It has branches for each course module so you can see the progress/diff and jump ahead to the completed solution in case something went wrong.

The course infrastructure is using Asciidoctor.js so that we can use includes (via region-tags) directly from our code repository.

So we also get syntax highlighting, admonition bullets, and many more useful things out of the box.

During the interactive course a lot of quizzes check understanding, let you run tests or check the database for successful updates.

The course also automatically integrates with the Neo4j Sandbox so you can run the test queries and also the app against your personal instance hosting the movies dataset. We went with a traditional Java dev setup, installing Java 17 and Apache Maven via sdkman.

As Java 17 brings string blocks and records, we wanted to make use of those niceties.

You might not have heard of SparkJava which has been around for quite some time and is the Express/Sinatra equivalent minimalistic web framework for Java.

As there will be other courses coming for Spring (Data Neo4j), we wanted to stick with something simple for this course. Quarkus was also an option that we thought of, but then we went with SparkJava for its minimalism.

So, moving the code over from JavaScript to Java was pretty straightforward, with just a bunch of replacements we had something working within a few minutes.

Our whole main app that registers the routes, adds error handling, verifies auth, serves public files formatting in JSON (using GSON), and starts the server is not more than 20 lines.

The docs for SparkJava are really short and comprehensive at the same time, everything you need can be found quickly.

The routes can be grouped by root path and then handled in a simple DSL. Here is the route for getting the favorites list in AccountRoutes

While going through the course, the implementation for using the database is added incrementally.
To be able to test, run, and interact with the app from the beginning, some static fixtures datasets are used to return responses from the services.

The original Javascript app used JS files to hold the fixtures as JS objects but we wanted something more portable.

Which can then be used in the service with this.popular = AppUtils.loadFixtureList("popular");.

To make it not completely static we used some Java Streams processing fun to at least handle some of the filtering, sorting and pagination even with the fixture data.

Which is then used in the services, like this:

The real service implementations use the official Neo4j Java Driver to query the database.
We can send parameterized Cypher queries to the server, use parameters and process the results within a retryable transaction function (read- or write-transaction).

Then you can create a single driver instance for your application lifetime, and use driver sessions as you go.

Sessions don’t hold onto TCP connections but use them from a pool as needed.
Within a session, you can use read- and write-transactions to do your (units of) work.

We got the connection credentials from application.properties which we had read in and set as System properties for convenience and initialized the Driver.

The driver is then passed to each service on construction and can be used from there to create sessions and interact with the database.

Here in an example of the FavoriteService for listing the favorites of a user, you can see how we use String blocks for the Cypher statement and lambdas for the callback of readTransaction

When adding a favorite movie, we use FavoriteService.add with a write transaction to create the FAVORITE relationship between the user and the movie.

The result.single() method would fail if there is not exactly one result with an NoSuchRecordException, so we don’t need to check for that within the query.

Our app also provides user management, to allow for personalization.
That’s why we have to:

For registration and authentication, we store the user directly as a Node in Neo4j and use the bcrypt library to hash and compare the hashed passwords with the inputs.

Here is an example from the authenticate method of AuthService.

For passing authentication information as JWT tokens to the browser and back, we use the Auth0 Java Library to generate the token and then also validate it.

This is done with a before handler in SparkJava, that on successful validation stores the sub which contains the userId in a request attribute that the routes then can access, e.g. for personalization or ratings.

Originally, we had planned to use Java 17 records throughout the course, but then we ran into two issues.

For one, the Google Gson library doesn’t support (de-)serialization with Records well yet, so we would have had to switch to Jackson instead (should probably have done that).

And, the results from the Neo4j Java Driver were not minimalistically convertible to a record instance as we liked.

As we didn’t want to add a lot of noise to the educational code, esp. if you want to keep the single-line lambda closure for the callback, we kept the toMap() API that the driver results offer.

We used JUnit 5 for testing, which was a no-brainer.

Because we wanted the same test to work across all branches of the repository no matter if a database connection was available or not, we used Assume statements to skip a few of the tests and a conditional on the existence of the driver instance for some cleanup code in the @BeforeClass/Before setup methods.

The course uses test execution with mvn test -Dtest=neoflix.TestName#testMethod to have the course taker check their progression and correct implementation.

Some of the tests also output results that the user is expected to fill into quizzes during the course.

For a real app, we’d could have gone with one of the larger app-frameworks, as there are more needs taken care of.

Also, the repeated use of plain Cypher queries for the operations, plus the mapping and error handling, should have been handled by infrastructure code that we usually would have refactored out.

But, for educational purposes, we left it in each service.

If you’re inclined and interested to rewrite it with any other web framework (Spring Boot, Quarkus, Micronaut, vert.x, Play, etc) please let us know and share the repository, so we can add it as a branch.

The post Building a Fullstack IMDB Clone with a Java Backend using SparkJava and Neo4j appeared first on foojay.

Previous Does Java 18 Finally Have A Better Alternative To JNI?
Next SQL vs. NoSQL: Pros & Cons